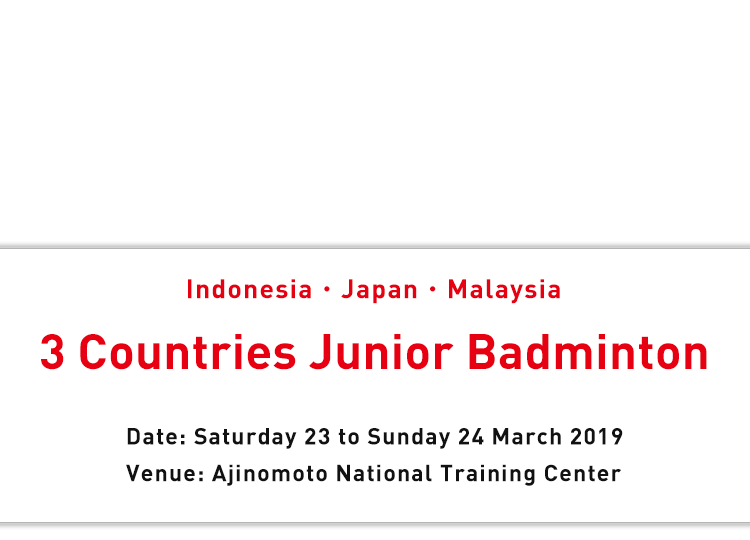 Junior badminton players from Indonesia, Japan and Malaysia who carry the future of the sport came together in Tokyo at the start of spring, just when the cherry blossoms started to bloom.
The three-country junior badminton competition, sponsored by DAIHATSU, was held for the first time.

March 23 11:00 am -
Opening Ceremony
Future badminton players who lead the next generation of the three countries arrived in Tokyo!

On the morning of March 23rd, a total of 40 junior players selected from Indonesia, Malaysia and various regions of Japan came together at the competition venue, the Ajinomoto National Training Center badminton court in Tokyo. The opening ceremony was held to precede the joint training in the afternoon and the friendly matches taking place the next day on March 24th.
After welcoming speeches from Nippon Badminton Association Vice President Yoshio Sekine and Ichiro Otaki from DAIHATSU Motor’s CSR department, who is in charge of DAIHATSU’s badminton projects, the players shouted words of encouragement together to promise that the event would be successful. 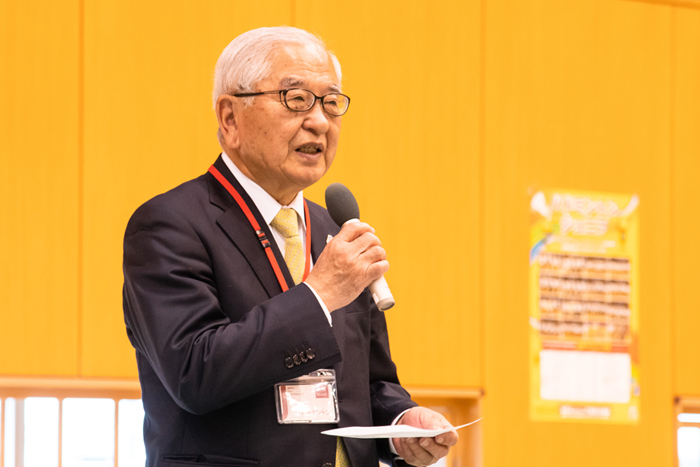 This event is commencing today thanks to the planning and coordination of the Nippon Badminton Association and DAIHATSU, which is a diamond sponsor of the Nippon Badminton Association and give tremendous support towards the popularization and development of badminton not only in Japan, but also in Indonesia and Malaysia.
This competition is a chance for international exchange for all the players here. I hope you can build up precious experiences, nurture your international awareness and use this as nourishment for when you become players who will compete on the world stage in the future.
To all the juniors who are gathered here, I hope you will approach badminton with the ambition that one day you will compete at an international level with pride for your nation. Please take your experiences here back to your home countries, with the goal of becoming players that can represent your nation and compete across the world. 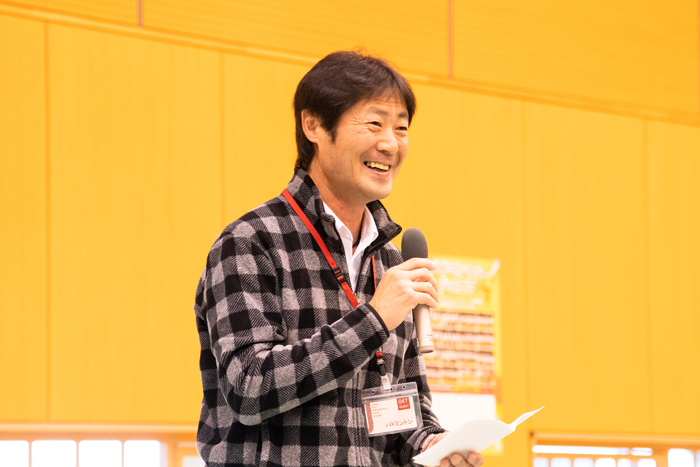 The DAIHATSU Group began to support badminton in 2017, with the intention of providing excitement to people besides manufacturing.
We are glad that this event is being held at the Ajinomoto National Training Center, a venue worthy of players who are aiming to represent their nations in the future. I hope you can all enjoy your matches and make the most of this international exchange of sportsmanship over these 2 days between today and tomorrow.

March 23 2:00 pm -
Joint Training
To prepare for their friendly matches, the players from the three countries amicably began their joint training session! 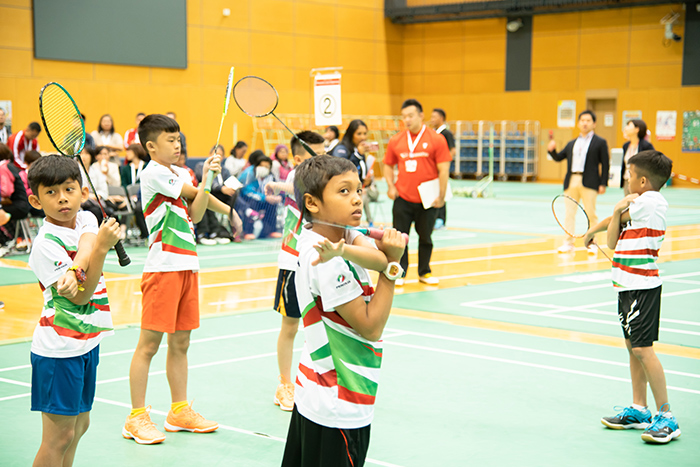 The joint training session started with a warm-up with the players grouped by country. The warm-up methods are different in each country, so the players looked over at each other’s courts with curiosity.
Once the players felt warmed up, the Japanese junior national coaches began their instructions. The players were now grouped into teams that combined the three countries. While there was a little confusion at first, they were gradually able to start communicating. They exchanged gestures and body language even though they didn’t know their languages as they completed the same training session. As the joint training came to an end, the players seemed open up their hearts, smiling, encouraging each other.

March 23 7:00 pm -
Welcome Party
A special guest appeared at a fun event to encourage friendship between the junior players!

After the joint training, everyone moved to a hotel in the city for the welcoming party.
The Japanese badminton player Nozomi OKUHARA appeared at the beginning of the party as a special guest. The junior players were very excited by this unexpected surprise!
OKUHARA came up to the stage to share memories from her junior years and to give words of encouragement. At the conclusion a commemorative photo was taken with all the players. She told the junior players to “be good rivals on the court and friends outside of it” ahead of their friendly matches on the next day.
Afterwards all the playing groups from each country took to the stage to introduce the members in their respective teams. This enabled the players to communicate more actively between countries at each table.
There was also a corner of the party venue where a demonstration was given by Takahiro Mizuki, a candy craftsman, who preserves the nostalgic tradition of candy sclupture called ‘Amezaiku’. The children gathered at the Amezaiku corner out of curiousity. 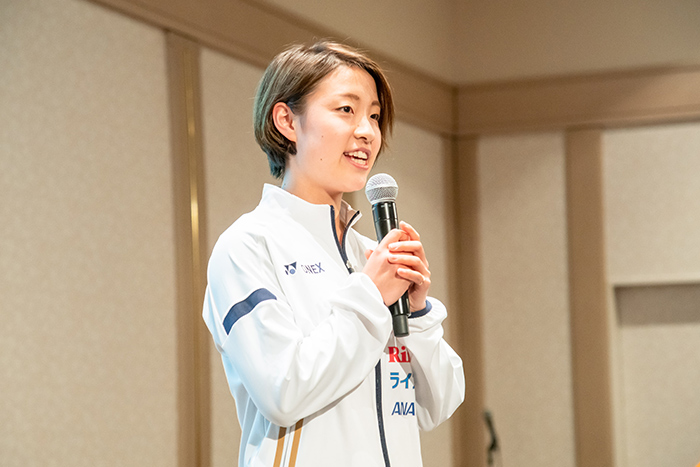 Ahead of tomorrow’s friendly matches, I know it seems important to you whether you will win or lose the game in front of you, but please also remember that the players from the same generation gathered here today will continue to be rivals as you progress through to be senior players. I hope you can establish positive relationships, so you can be good rivals on the court and friends outside of it. Good luck, everyone!

March 24 10:00 am -
Friendly Matches
The serious contests finally began between the top junior representative players from each country!

A total of 40 players made up of 10 selected from Indonesia, 15 from Malaysia, and 15 from Japan were grouped in 8 teams of 5 players by country. They were split into three categories: A group (3 countries), B group (3 countries) and C group (Malaysia vs Japan).
It was a combined contest decided by the results of 5 matches consisting of boys and girl singles, boys and girls doubles and mixed doubles. In contrast to the peaceful atmosphere of the day before, the selected junior players to represent their countries switched gears to play with great intensity.
However, after the matches the players smiled and shook their hands. Some could be seen swapping game uniforms and praising each other’s performances. It showed the junior players’ friendly interactions went beyond their competition on the court. 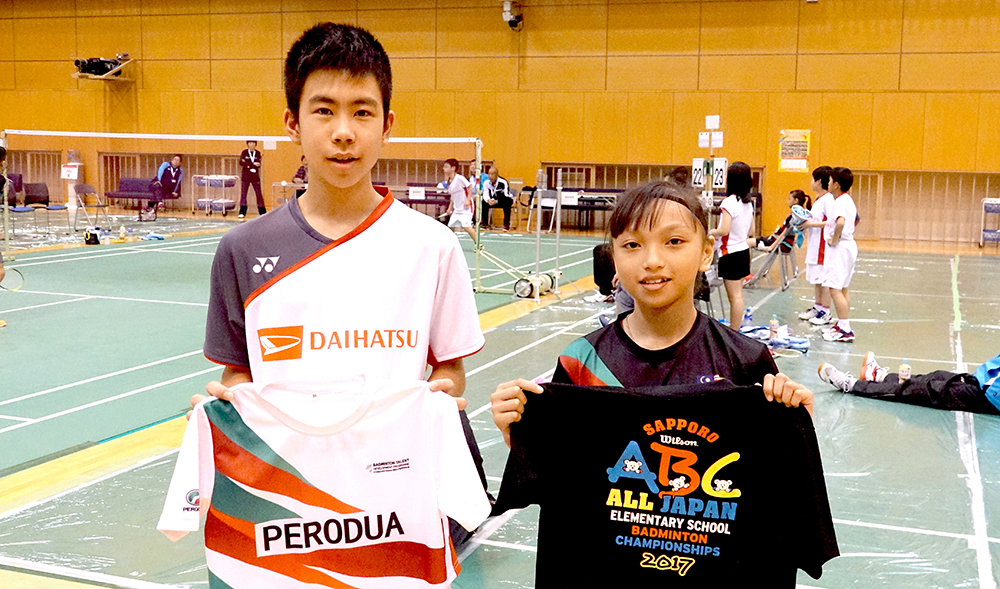 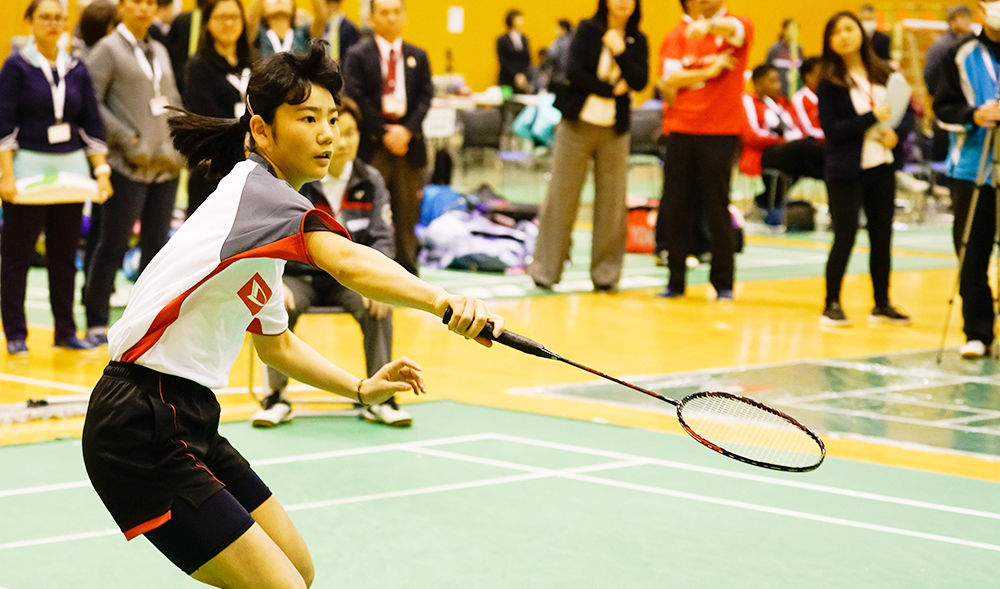 March 24 5:00 pm -
Award Ceremony/Closing Ceremony
Who were the winners? Here is the report of the results from the hard-fought matches!

After all the matches concluded, there were awards given for the 1st to 3rd place in each of the three groups. In the end, the teams from the host nation of Japan managed to come 1st in the A group and C group. The Indonesian team came 1st in the B group.
Every player was presented with medals at the award ceremony. As a participation gift, all the players who took part in this event were also given a replica Japan national team uniform. 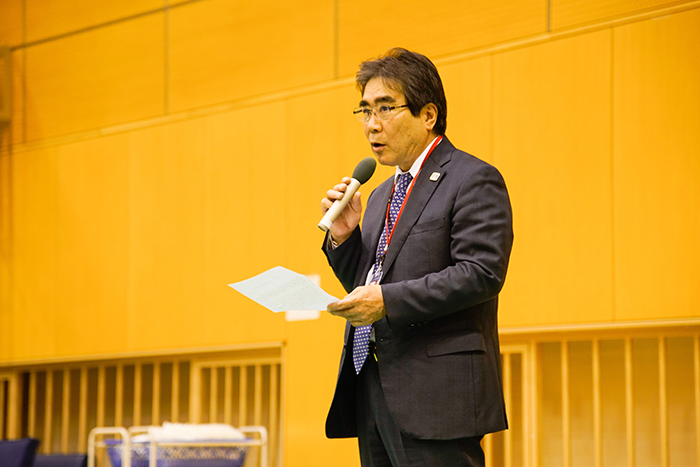 Japan Schoolchildren Badminton Federation President
Mr. Norio Noto
The joint training yesterday and the friendly matches today were all filled with passion and the content was fruitful. I feel that this event is a project that has a very significant meaning when considering the future development of the three countries in the sport.
We hope that the outcomes of this competition can be utilized to further the ongoing development of badminton in each of the three nations. 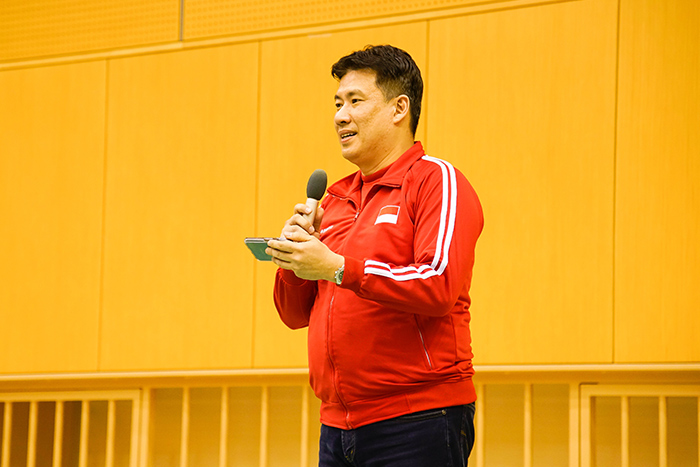 Alan & Susy Technology (ASTEC) Owner
Mr. Alan Budikusuma
Thanks to having experienced this competition, I think that these young Indonesian players will keep working hard with their motivation rising even higher. This event was a fantastic chance for each of these players to gain experience and test their own ability.
We will keep working to raise the level of badminton in Indonesia together with DAIHATSU. 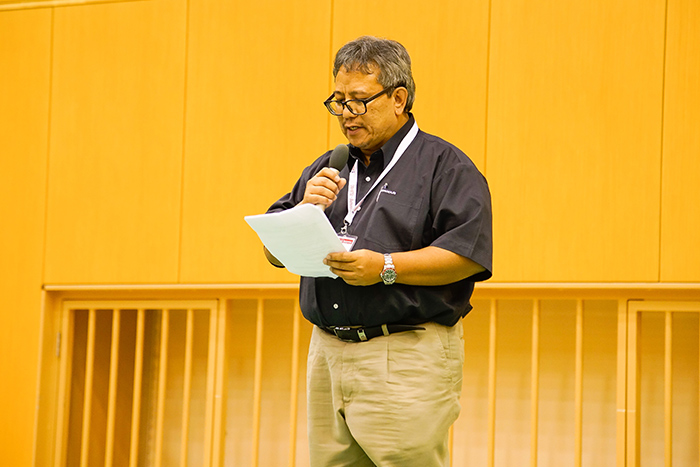 Perusahaan Otomobil Kedua Sdn Bhd President & CEO
Dato’ Zainal Abidin Ahmad
I was greatly moved by the badminton ability, sportsmanship and correct discipline of the players after watching these friendly matches. You all did very well. You must be proud to have competed as representatives of your country. Please give yourselves some praise.
It is important to have the desire to win, but please don’t forget that the aim of this event is sportsmanship and for each of you to keep improving. 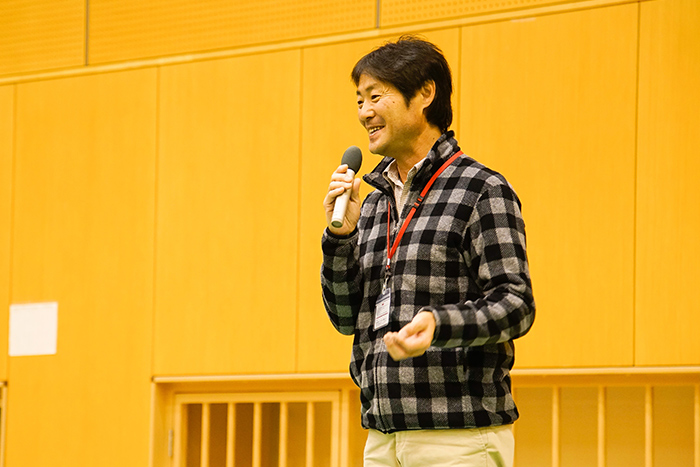 DAIHATSU Motor Co., Ltd.
CSR Department, Head of Badminton Projects
Mr. Ichiro Otaki
As I expected, all of today’s matches were tough contests. There were many entertaining matches that were as good as what you can see at a senior international tournament.
You are all still young and your badminton career has just begun, but just as Nozomi OKUHARA said that you should be “good rivals on the court and friends outside of it” at the welcoming party yesterday, I hope you use this competition as a chance to keep making many good connections from now on.

The new three-country junior badminton project was a great success!
The future of badminton starts here.

The very first “3 Countries Junior Badminton” competition came to a close as a great success. There could be many future medalists who start their journey from here. 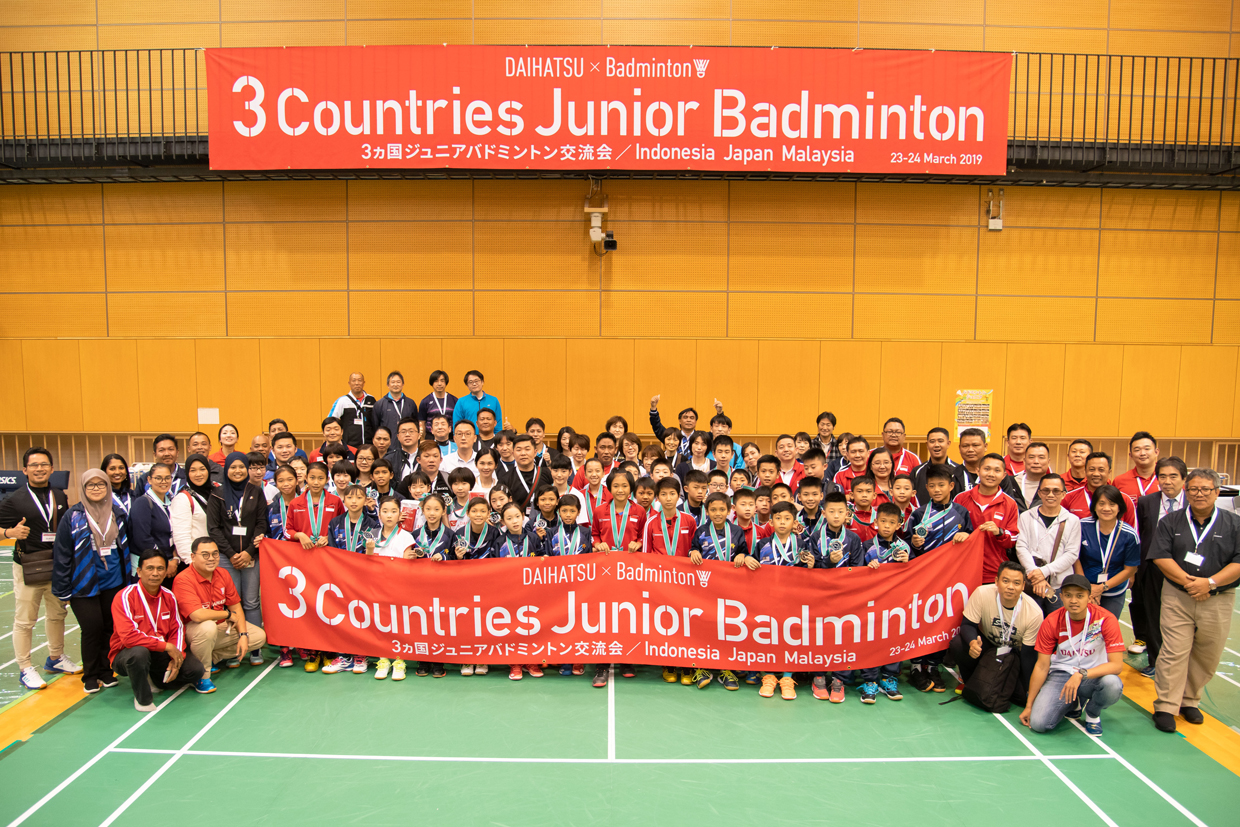