The 19th Daihatsu ABC Badminton National Primary School Tournament was held over 3 days from August 10 at Yatsushiro in Kumamoto prefecture for the first time in 3 years, at the Yatsushiro City General Gymnasium and Yatsushiro City Toyo Sports Center.
The representative players who won through each of the prefecture qualifying rounds came together at the battleground in Yatsushiro. The former female Japanese national badminton player Kumiko OGURA reported about the heated matches. 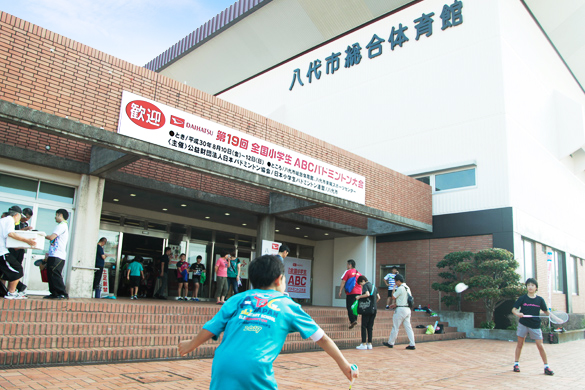 The ABC Badminton National Tournament was held at the Yatsushiro City General Gymnasium since 2007, in different locations for the past 2 years due to the Kumamoto Earthquake that occurred in 2016. The local people were overjoyed that the tournament was to be held here in Yatsushiro again after 3 years.

This gymnasium (Yatsushiro City General Gymnasium) actually holds a lot of fond memories for me personally. I played many matches at this gymnasium when I was a junior player, so I have plenty of happy memories, as well as regrets. When I came to the gymnasium again today, I had a strong feeling of nostalgia because it has been a long time since I last came. I believe this venue would evoke these emotions for all the other badminton players of my generation as well, not just me.
Kumamoto has always been a renowned prefecture for badminton, while Yatsushiro in particular has produced many famous players. Kimiko JINNAI, who represented Japan at the Barcelona Olympics, as well as Keigo SONODA from the “Sono-Kamu” pair are from Yatsushiro. Badminton has been popular in Kumamoto for many years, so there are plenty of passionate local fans who cheer with a lot of spirit and energy.

Returning to this “place where badminton is loved”, and remembering the feeling of playing here as a junior, I found myself cheering hard for the primary school players.

All the players won through the national qualifiers, so I was able to see high level matches in each group.
Rei SAITO (Fukuoka prefecture representative) in Boys A Group is an attacking player but can also receive very well. He could receive them in a way that drew mistakes from the opponent, move quickly and dominate the matches with speed. He has the ability to link up instead of simply attacking or defending, so he was able to control matches from the beginning to the end. He is a player that can put pressure on the opponent.
For male badminton matches it is said that “those who command the front of the net, command the match”, so if he learns some more tactics to put pressure on the opponent in front of the net, I believe he will improve even more.

Fuu HIGUCHI (Tokushima prefecture representative) in the Girls A Group was also great. She is a player with plenty of power, and her shots from high to low were very solid. She is able to hit a push shot, which is rare for a girl player, while I also felt her high quality short drop shots were good as well. Her diligent play sticks to the fundamentals and she uses her feet properly to hit firmly, while she also has the power to pull across. She could also hit shots hard to anticipate, so she is a player that can strike fear into the opponent. If she can learn to change the speed of her play at each moments, I believe she will become even stronger.

The player who left the strongest impression on me at this tournament was actually Shuji SAWADA (North Hokkaido representative) in the Boys A Group. Although he narrowly lost to the winner Rei SAITO in the semi-final to end up finishing 3rd, he played very well for a grade 5 player against a grade 6 player. He won in the B group last year so I paid attention to him and felt that he might be a gifted player with No.1 technique in this year's tournament. He was good at using the racket surface, and hit shots that you couldn't anticipate. His body has grown as well, so it seems that he overcame the problem of being unstable this year. At the moment he depends his hands a little too often, but if he can train to firmly hit with his whole body, he will be a promising player. I expect him to improve even more until next year.

Looking Back at the Tournament 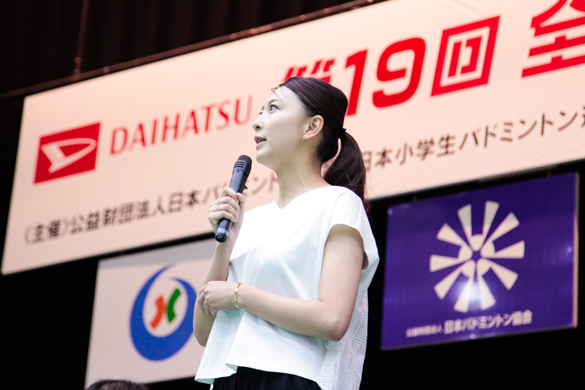 By participating in this tournament, I felt once again that these children are now able to play in a really good environment. For example, I was surprised to see the court mat laid out on every court in the venue. In a gymnasium with a well-ordered environment, they can concentrate on playing to their full potential-isn't this a great thing for the players? I hope the players who appeared in this ABC National Tournament feel proud to have participated and will face badminton with all their best.

Message to the Primary School Players

The players who are performing across the world such as the “Taka-Matsu” pair of Ayaka TAKAHASHI and Misaki MATSUTOMO, as well as Akane YAMAGUCHI, Nozomi OKUHARA and Kento MOMOTA, appeared in the past at this ABC National Tournament. They all progressed to the world stage through this tournament, so this is the place that everyone should aim for first. The senior players who went before you are now giving their all against the world's best. You are responsible for the future of Japanese badminton that will be passed on after them, so I greatly expect you for your future achievement. 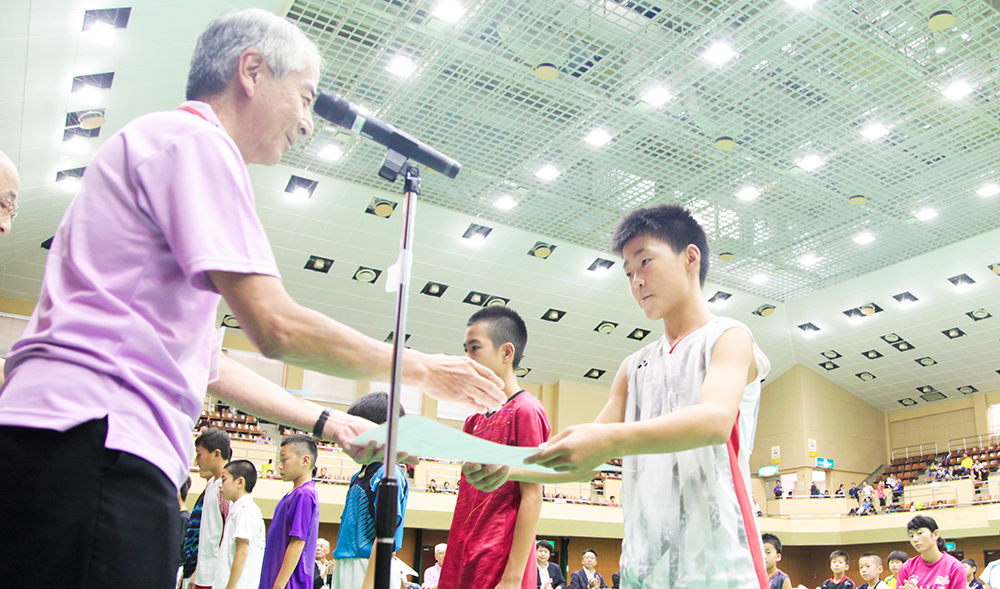 About the Atmosphere of the Tournament

The venue was vividly decorated in red and looked more vibrant than before.
I also felt that the use of photos of the winners in the tournament poster greatly motivated the players.

Message to the Players

Compared to the past tournaments, I felt that the C group's mentality was very strong.
It seemed that even when the players were wavering, they were able to fight through the competition together with the bench.
In comparison, in the A and B groups I felt that the players are still developing some sense of independence that restricted their play.
I hope to see maturity from both the A and B groups that can help them to challenge the higher levels.

Goals and Improvements for the Future

We have a strong sense of mission because we are participating in an Olympic sport and supporting the primary school federation that is the starting point for that. We hope to pass on the spirit of challenge to compete on the world stage. 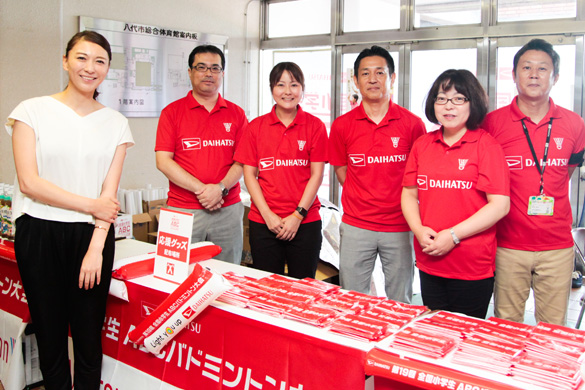 At the Daihatsu booths set up in the venue, the smiling staff provided cheering balloons, paper fans and drinks to the players and team participants.
The tournament itself became very lively thanks to the support from Daihatsu. The players' parents are surely proud that their children were able to play at such a wonderful tournament. Thanks to the support from Daihatsu, the tournament came to provide not only the players but also their parents a chance to dream.

Japan para-badminton national team players were invited to perform a demonstration after the opening ceremony on August 10. The 4 players were the Mens WH1 representatives Osamu NAGASHIMA and Shin OHAMA, the Womens WH2 representative Yuma YAMAZAKI and WH1 representative Sarina SATOMI. The primary school players carefully listened to these 4 players explaining the rules of para-badminton while they performed their demonstration. The primary school players and the other spectators cheered loudly at their excellent play skillfully handling wheelchairs.

We received messages of support to the Japanese national players from the players and spectators! 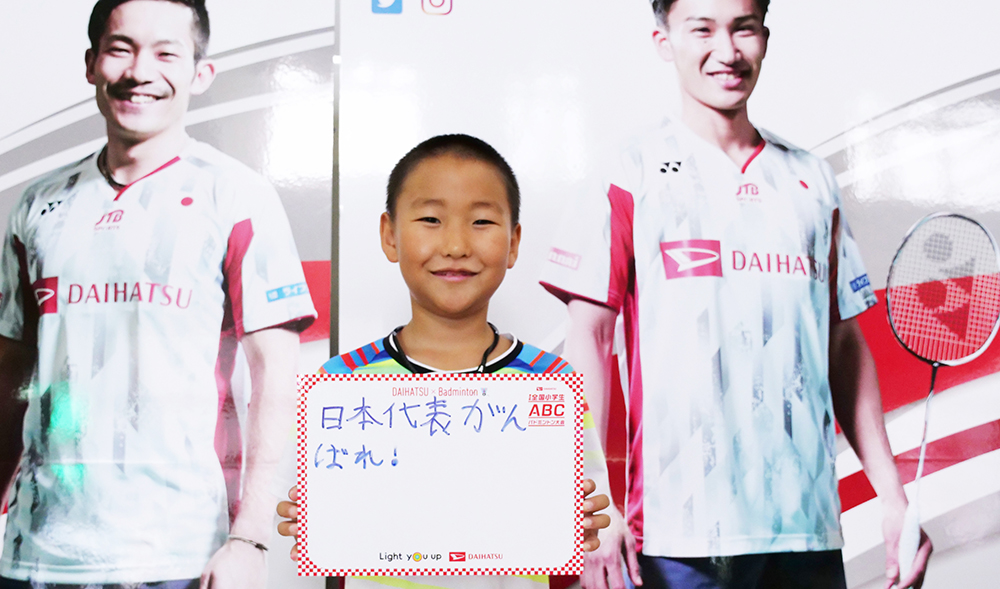 KUMAMOTO DAIHATSU / DAIHATSU MOTOR supported the tournament together with everyone who gathered together from across the nation! 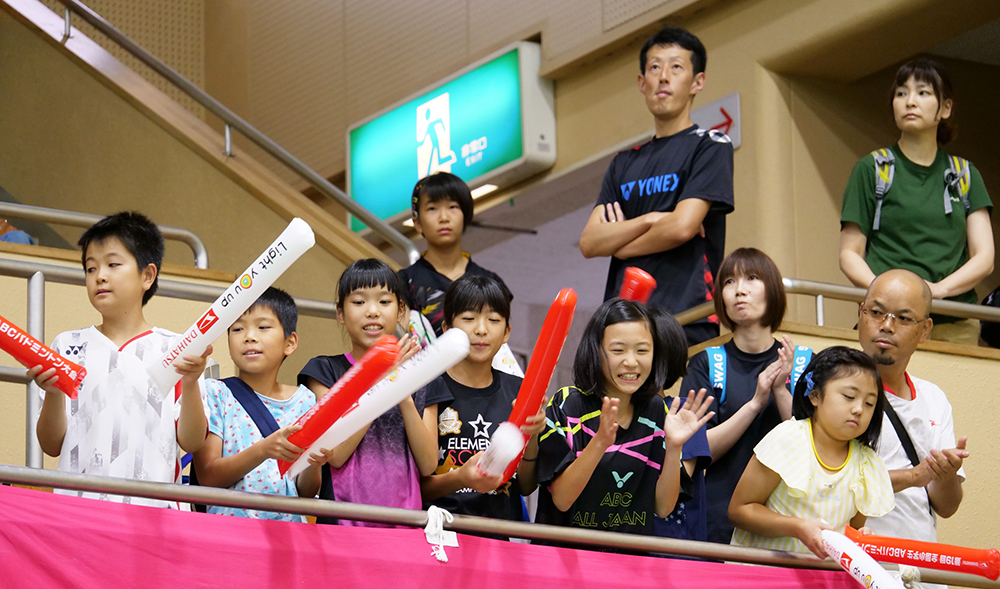