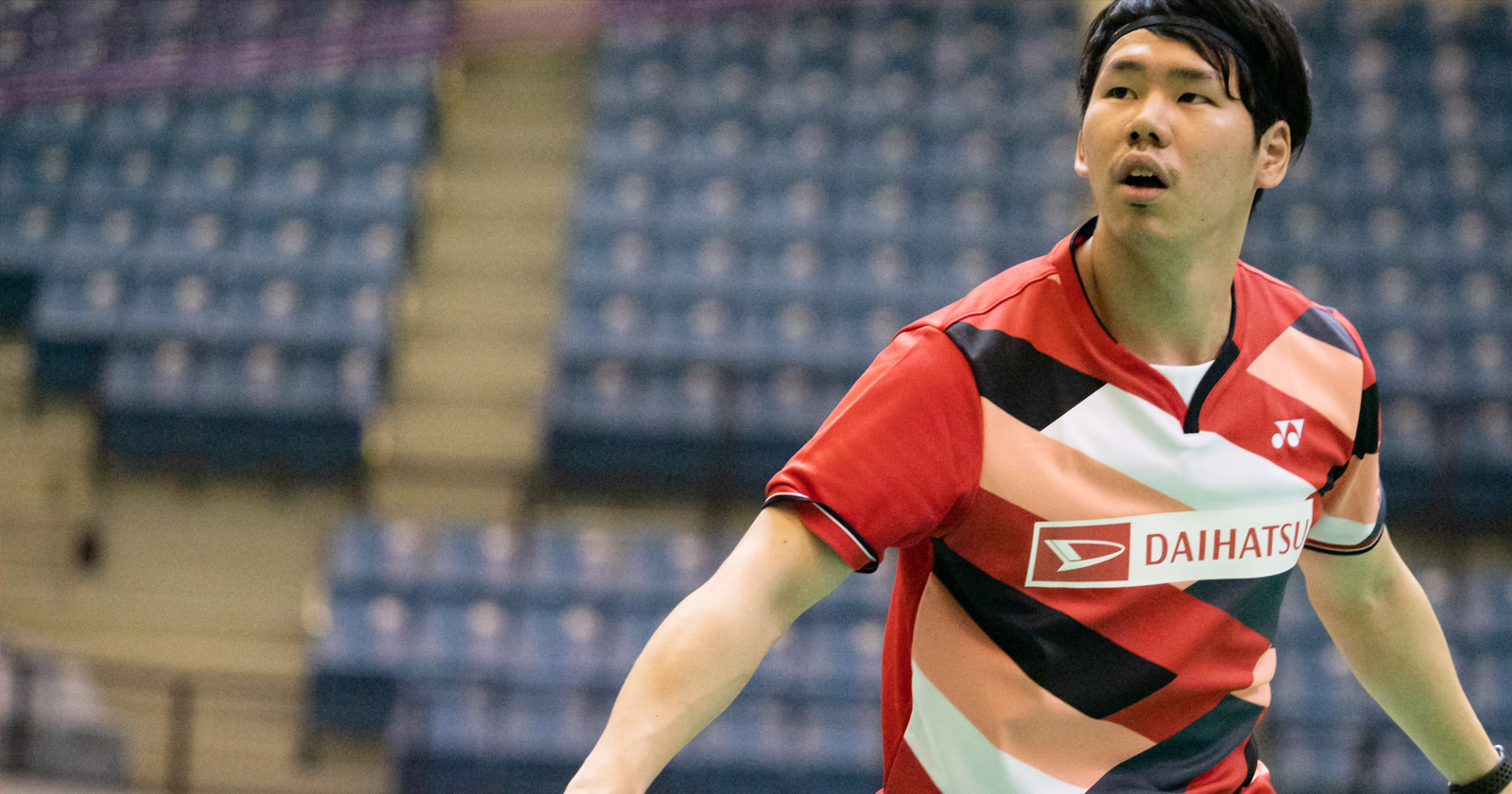 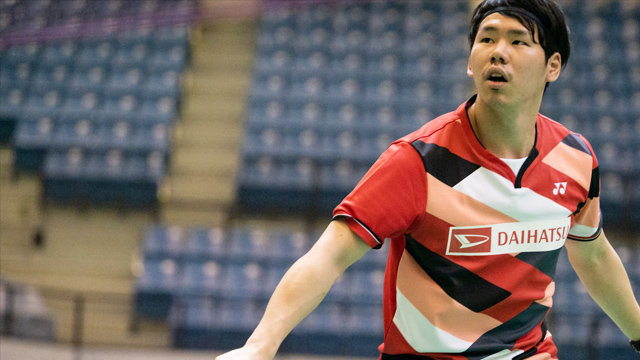 The opening ceremony was held on Day 1, Saturday, 14th December, and the athlete's oath was taken by Sarina SATOMI, a native of Chiba Prefecture. Afterward, competitions were held in a total of 12 classes, including Men's and Women's Singles, and a total of six classes including Men's and Women's Doubles competed on Day 2, Sunday 15th, to decide the best of each class in Japan.

Many players competed in both the Singles and Doubles, and Daiki KAJIWARA in the WH2 class, Daisuke FUJIHARA in the SL3 class, Katsuhiro YAMAMOTO in the SL4 class, Taiyo IMAI in the SU5+ class, and Rintaro NAKANO in the ID7 class in the Men's won two titles. In the Women's, Sarina SATOMI in the WH1 class, Yuma YAMAZAKI in the WH2 class, and Noriko UCHIDA in the ID7 class also won two titles, and eight players held up two gold medals in the award ceremony.

Daisuke FUJIHARA, who won in the Men's Singles SL3 class for the fourth consecutive time, shut out his opponent in some games and advanced to the final with incredible power. His opponent in the final was Toshiaki SUENAGA, a rival he has competed against in the finals of the last four tournaments. In the last two tournaments, FUJIHARA was defeated by SUENAGA in the Doubles competition, but was undefeated in the Singles. The two went head to head for the fifth time in the final of this tournament, which was a tense tug of war between offense and defense from the very start of the game. However, FUJIHARA took the first game 21-10 after gradually extending his lead after the interval and carried on this momentum to win the second game. With this brilliant performance, he won the tournament for the fifth consecutive time. FUJIHARA also won as a pair with Katsuhiro YAMAMOTO, who won in the Men's Singles SL4 class, in the Men's Doubles SL3-4 class that took place the next day, taking home two titles this tournament. The results showed his dignified presence as a designated development player who performs on the world stage.

Taiyo IMAI, who won in the Men's Singles SU5+ class, is a notable young player who currently has the greatest momentum in the para-badminton world. In the Doubles final where he was paired with Tetsuo URA, a veteran player he looks up to as his mentor, he moved around the court freely with light footwork and showed outstanding play on both offense and defense against the pair of Yuya ITO, the champion of the last tournament, and Daichi BABA. He demonstrated remarkable teamwork with URA, dominating his opponents with his shot variations, and took the first game 21-16. However, the ITO and BABA showed their tenacity in the second game, which turned out to be a tight match where the pairs competed against each other for scores until the final stage of the game. In the end, IMAI and URA hung on to win the second game 21-18. IMAI brilliantly won titles in Singles and Doubles.

Sarina SATOMI in the Women's WH1 class, who took the athlete's oath at the opening ceremony, is originally from Chiba Prefecture where the tournament venue is located. She participated in this event with the mindset that she cannot lose a tournament held in her hometown, and competed against Ikumi FUKE, an employee of Daihatsu Motors, in the Singles final on Day 1. SATOMI and FUKE competed against each other in the finals of the same class in the last two tournaments, and the results were 1 win and 1 loss. The two, who are said to have been aware of each other since before the tournaments, had a head-to-head showdown for the third time in this final, with high-level rallies throughout the game. In this highly charged match the players called out to each other—when SATOMI raised her voice, FUKE responded—and the entire court became one. SATOMI won the heated match that attracted the attention of the entire venue 21-8 and 21-11, winning the tournament for the second consecutive time. SATOMI also won the tournament brilliantly in the Doubles where she was paired with Yuma YAMAZAKI, and displayed the full range of her world number ranked 1 abilities following the HULIC・DAIHATSU Japan Para-Badminton International 2019, which was held in November.
FUKE, the runner-up of the Singles tournament, also won 2nd place in the Women's Doubles WH1-2 class where she was paired with Rie OGURA. Despite being unfortunately defeated in the final by the powerful pair of Sarina SATOMI and Yuma YAMAZAKI, the Singles champions, FUKE brought excitement to the tournament until the end with her dynamic play, responding to the enthusiastic cheers from the stands.

The crowed was thrilled by the nail-biting matches of the players! 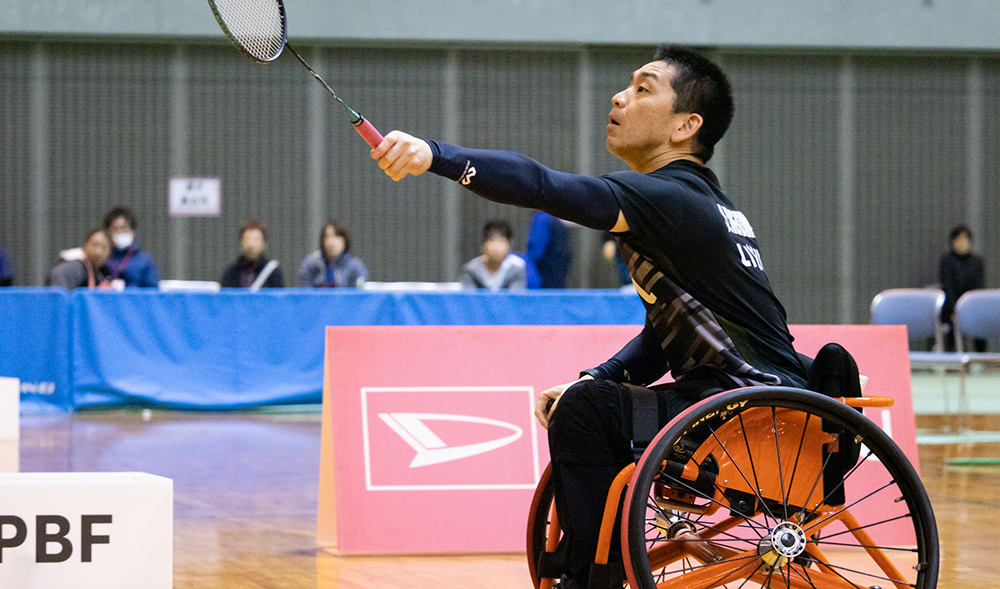 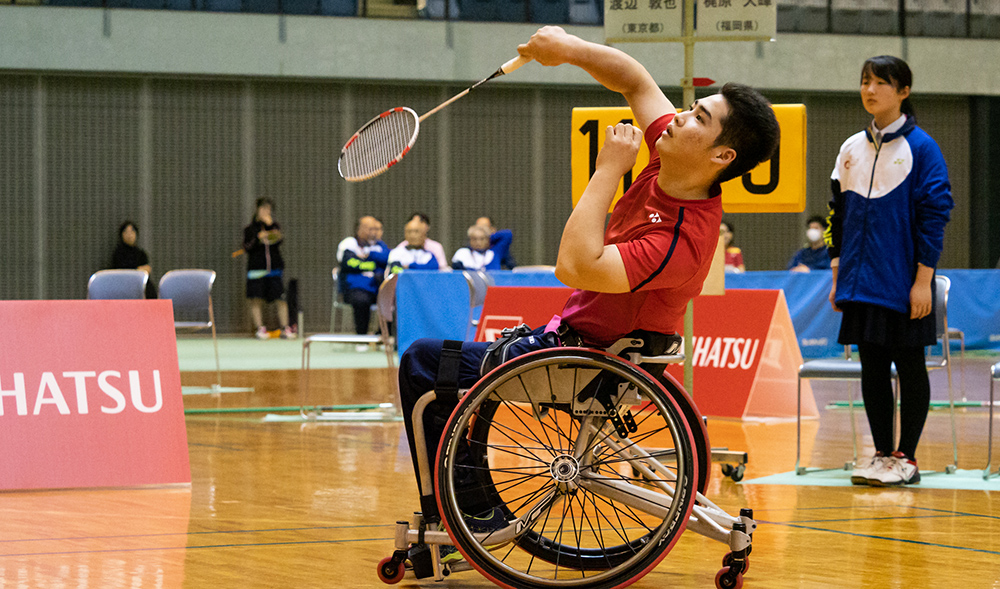 The Daihatsu Group supported the tournament together with everyone who came from across the nation!

The venue for this tournament is Chiba Port Arena, which is located a roughly 10-minute drive from JR Chiba Station. For the tournament held in Fukuoka last year, a special medal featuring the locally manufactured Kurume Kasuri in the strap section was prepared in tribute to Kurume, where the venue is located. This year, Maiwaizome, a local specialty of Kamogawa, Chiba, was used for the strap section. Kamogawa Maiwaizome Suzusen has cooperated in the production of the strap. The medal itself was manufactured by Daihatsu Metal Co., Ltd., following on from last year. The special gold, silver, and bronze medals that are only obtainable in this tournament, were given to the top three players of each class by the presenters including Soichiro OKUDAIRA, the President of Daihatsu Motor Co., Ltd., and Nobuyuki AOKI, the President of Daihatsu Chiba Sales Co., Ltd. at the award ceremony held after the matches on Sunday, 15th December, 2019.
DAIHATSU, the main sponsor of the tournament, set up special booths inside the venue, including the “DAIHATSU × Badminton Cafe.” Hot drinks and sweets made with peanuts, a local specialty of Chiba, were offered to people who came to the venue. There was also a display of DAIHATSU’s welfare vehicle, the Tanto Sloper, which allows users to get into the back seat while in a wheelchair. The staff of Daihatsu Chiba Sales introduced the features of the latest welfare vehicle to people who came to the venue.