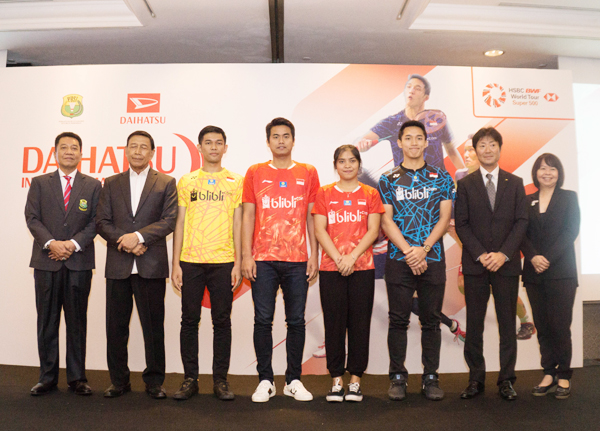 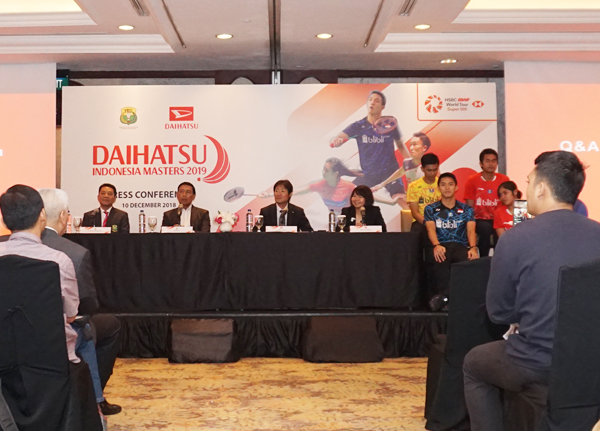 Daihatsu announced its support as sponsor of the “DAIHATSU INDONESIA MASTERS 2019” for the second straight year with top-ranked badminton stars from around the globe ready to pit their skills and entertain fans with world-class performance at the Istora Senayan in Jakarta.

Following the successful staging of the 2018 edition, the Daihatsu Indonesia Masters 2019 is now recognised by many as among the world’s top tourney under BWF’s calendar, carrying great weightage for participating players and nations, as well as partners, local and global fans. Last year’s edition was a truly memorable event as thousands of fans flocked to Istora Senayan from the preliminary rounds right up to the finals, which were dominated by the home shuttlers. Of the five finalists, four were from Indonesia, proving Indonesia’s strength and dominance in the tournament in 2019.

Local hero Anthony Sinisuka GINTING (men’s singles) and top pair Marcus GIDEON and Kevin Sanjaya SUKAMULJO, the world’s men’s doubles powerhouse, were clearly on top of their game to win their respective wins. However, the country’s women pair of Greysia POLLI-Apriani RAHAYU and crowd favourites Tontowi AHMAD-Liliyana NATSIR, stumbled in the finals and settled as the runner-up. Indonesia has proven their depth with the large pool of world-class players in the tournament in 2019 and is expected to show its strength the upcoming Daihatsu Indonesia Masters 2019 as well.

From 22 to 27 January 2019, badminton fans are in for a week-long badminton treat, on and off the courts, at the Istora Senayan. The tournament being greated up from Grand Prix Gold to super series has indeed put Daihatsu Indonesia Masters at the top of the players’ calendar. China has sounded their serious intention, sending a large squad of more than 50 players while Indonesia is ready to parade the largest contingent with Anthony GINTING and Marcus GIDEON-Kevin Sanjaya, Tommy Sugiarto and Jonatan Christie and many more.

Astra Daihatsu Motor and Daihatsu Motor made an announcement of their sponsorship in the tournament 2019 at the press conference in Jakarta on 10th December 2018.

At the press conference, Mr. Wiranto, the chairman of the Indonesian Badminton Association (PBSI) expressed his appreciation to Astra Daihatsu Motor and Daihatsu Motor for their strong support and the initiatives in boosting badminton in the country with the sponsorship of the Daihatsu Indonesia Masters for the second consecutive year.

“Daihatsu and PBSI have long been partners, collaborating in many badminton projects and tournaments at grass-root as well as the elite levels,” said Mr. Wiranto.

The marketing Director of PT Astra Daihatsu Motor, Ms. Amelia Tjandra expressed her gratitude to the PBSI and the related parties for giving opportunity to contributing to the further growth of badminton. She mentioned that with the corporate slogan "Daihatsu Sahabatku", the company aims to be the "Sahabat" to all the Indonesian people through various activities, especially in badminton.

The general manager from Daihatsu Motor also expressed his appreciation toward the PBSI and the related parties, and announced that they as a group were preparing to create a better platform for junior players, who regard the Indonesia Masters as their dream stage.

One of the most popular mixed doubles top players, Liliyana NATSIR looks forward to play in the Daihatsu Indonesia Masters 2019. This will be Liliyana’s final tournament, before her successful 16-year badminton come to an end.

“I’m proud to be part of the Daihatsu Indonesia Masters 2019, a prestigious event that will be held from 22 to 27 January. To all fans and spectators, please mark the dates and come over to Istora Senayan to witness world-class players in action with your own eyes.”

“In 2018, we witnessed many great moments on and off the courts, the atmosphere at the arena and its vicinity was very fantastic, fans continuously flocking to the venue, and the quality of games were superb and highly competitive. We hope to see and experience even better happenings in Daihatsu Indonesia Masters 2019,” said Liliyana. 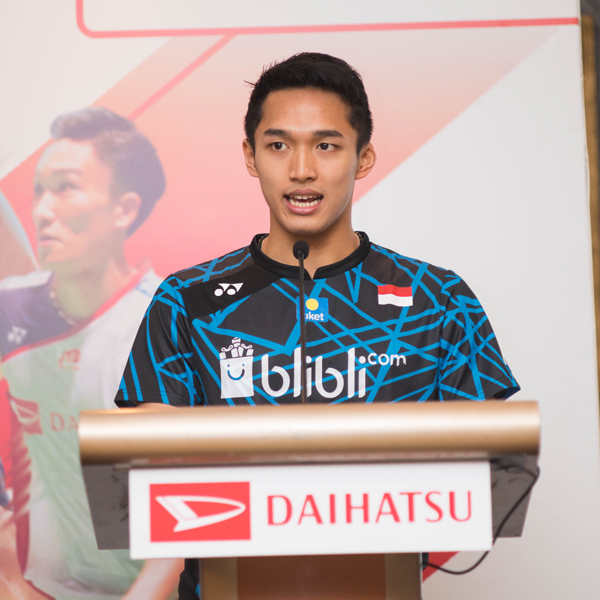 For Jonatan CHRISTIE, currently ranked among Indonesia’s best singles shuttler and the Asian Games champion, Daihatsu Indonesia Masters 2019 is on his top priority as the early season tournament provides him an indication of his performance in 2019.

Daihatsu’s involvement as sponsor for the Indonesia Masters is significant, resulting in the tournament grade being elevated from Grand Prix Gold to the World Tour Super 500. It provides opportunities for the Indonesian players to compete against the world’s best players Jonatan acknowledges.

Jonatan has strong hopes to repeat his 2018 Asian Games gold medal feat at the Daihatsu Indonesia Masters 2019 but admits that the path to the winner’s podium will not be easy to go through.

“We have talked about overcoming hurdles posed by big names like Kento MOMOTA from Japan, SHI Yuqi from China, Anthony GINTING as well as Viktor AXELSEN. The standard of the Daihatsu Indonesia Masters is so high that you have to really be at the top of your game, physically and mentally, to progress into the final rounds,” concluded Jonatan. 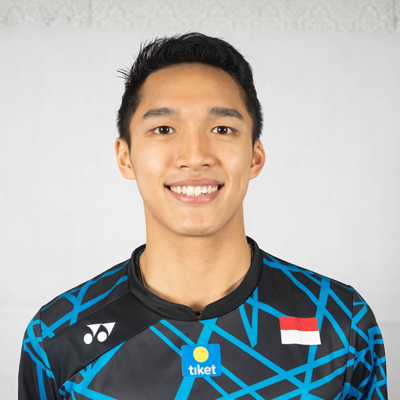 This is definitely a very important tournament to me as being a Super 500 tournament, it carries a lot of weight in terms of prestige and ranking points, apart from the attractive prize pool.

Preparation has been good as I’ve started training quite early. This time around, I’ve ample time to improve on my game and techniques and hopefully, all turns out well.

Of course, it would be extremely awesome if I could repeat my Asian Games gold medal achievement but at the same time, I have to be realistic as it would not be easy. I have competed in the Indonesia Masters four times now and hopefully, my fifth appearance in 2019 will be fruitful.

The local fans' supports at Istora Senayan have always been great. Let’s make sure that every seat at the venue is filled up during the competition. Your support means a lot to us. 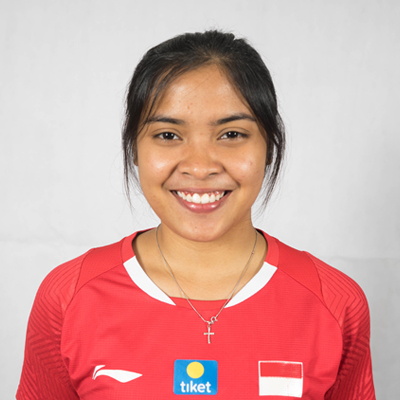 This has been a good year for me so far. Previously at the ranking of 50-60s, but currently I’m ranked at 15. Although I’ve lost in the first round to GOH Jin Wei during the past Daihatsu Indonesia Masters 2018, I’m very grateful that I’ve been able to part of some good matches ever since.

My preparation for every match has always been taken seriously, especially on the trainings.

I want to target better this year, if possible I’m aiming to be ranked within the top 8.

Regardless of the new or existing continuous support and love for the Indonesian badminton, we’re all thankful for everyone who always hope the best for us. 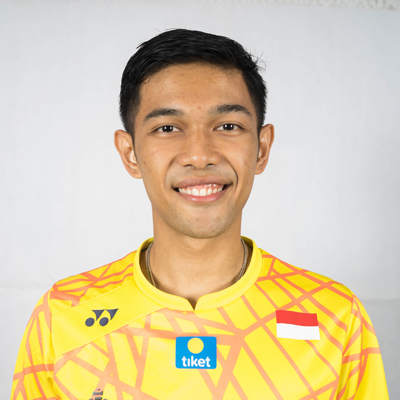 There are ups and down for my badminton journey with Ryan this year. Earlier this year, we targeted ourselves to achieve the ranking at the top 5, but we ranked 6th instead. Although our results haven’t been consistent throughout some tournaments, especially for the past Daihatsu Indonesia Masters 2018, in which we lost in the second round, so we will target to achieve better in 2019.

We do not have a particular practice method this time as we practice just the same for all our matches. We are always in responsible for our own physical and mental condition to face all tournaments, and same goes to this tournament, we will prepare ourselves for the best fit, and be ready for next year.

As the Daihatsu Indonesia Masters is crucial for us to garner enough points to qualify for the Olympics. We are very much ready to give our very best.

Do join us at Istora Senayan next year to watch all of us compete with passion and excitement. 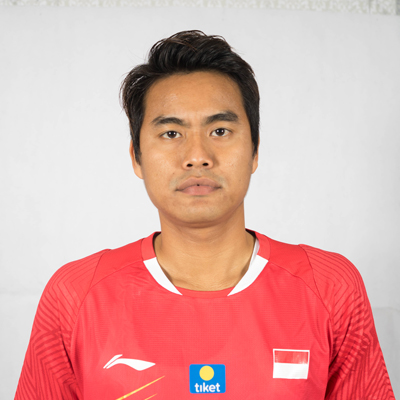 In the previous Daihatsu Indonesia Masters 2018, we’ve lost in the final. I’m looking for the tournament in 2019 as I’m happy with my achievements so far this year with Liliyana, while my rank is secured in the top 3.

I have practiced as usual, while the only thing has changed this year is that I have enjoyed my last training days with Liliyana, who will soon retire from the badminton world.

I’m hoping to achieve for a higher rank in the tournament 2019 as this is my last match with Liliyana. Hopefully this will be the best match for me and for Liliyana.

We’re all thankful for the continuous support by the fans toward the Indonesian badminton and we hope to see a full seated stadium at Istora Senayan. 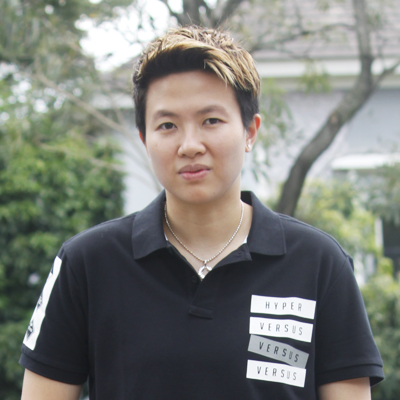 It’s really an honour to be part of this tournament as you get to compete against the world’s best. It will be great test for all players especially early in the year.

I'll be partnered with Tontowi again for this last time before my retirement. Now, we’re training as usual and hopefully, it will turn out to be a memorable gift for me.

Of course, I’d very much like to be in the finals but I know it won’t be that easy, especially with the top Chinese and Japanese pairs aiming at similar targets. I’ll take things one at at time during the tournament and see how it goes.

Don’t forget to book your dates for Daihatsu Indonesia Masters 2019 and come over to Istora Senayan with full spirits. The excitement made by your cheering voice would surely push us to do our best. Let’s all show our support and make this tournament a great success!