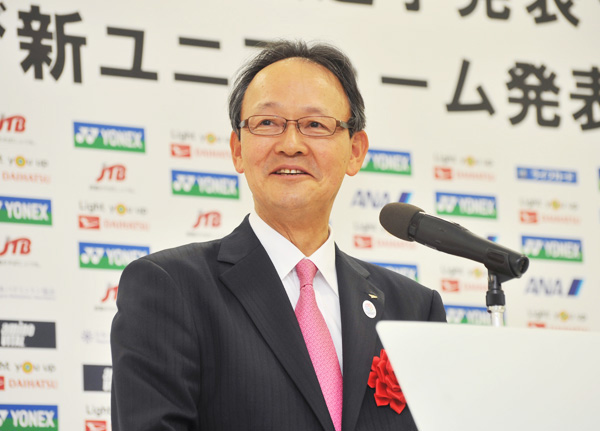 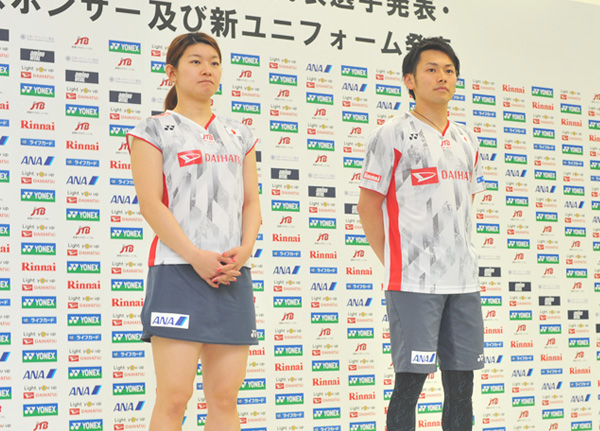 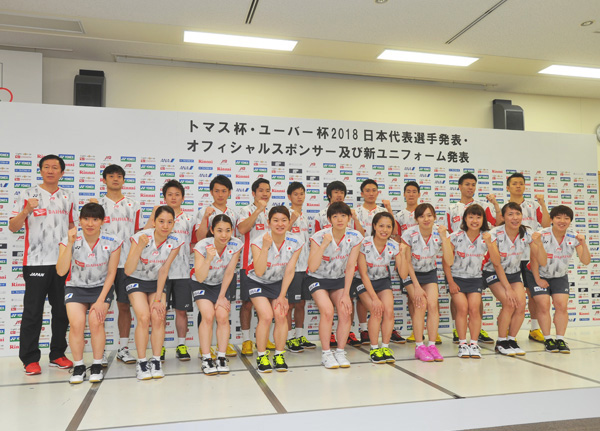 The TOTAL BWF Thomas & Uber Cup will be held in Bangkok, Thailand from Sunday May 20 to Sunday May 27, 2018. This historic tournament is held once every 2 years, with the Thomas Cup for men and the Uber Cup for women. With 3 singles and 2 doubles fixtures for a total of 5 matches, it is a fierce battle to decide the world’s number 1 badminton nation.

The 20 Japanese national team players who will appear at the tournament, as well as the management and coaching staff supporting them, came together at the press conference held on Thursday May 10 at the Ajinomoto National Training Center. The new uniform that the players will wear at the tournament was also unveiled.
First of all, each company that makes up the official sponsors and suppliers for 2018 were introduced, with the Director & Senior Managing Executive Officer from Daihatsu Motor Co., Ltd, Shigeharu TODA, giving a speech. He sent his best wishes to the players, saying that “Daihatsu also gains a lot of energy from supporting badminton, which is a big priority for us. We know that both the men and women players will give their best effort towards winning the tournament.”

The new Japanese national team uniform for 2018 was presented afterwards. The theme of the design is “Yabane (arrow feathers)”. It is a traditional Japanese pattern that uses the eagle and hawk feathers on the end of an arrow as a motif. It is said to be an auspicious pattern because an arrow with feathers flies in a straight line. When asked about the uniform, the men’s captain Takeshi KAMURA commented on the functionality, saying that “it is light and the fabric is soft, so it is easy to move in it. I sweat a lot, but I don’t even notice because it feels so dry”. The women’s captain Ayaka TAKAHASHI shared her thoughts about the design, saying that “the design is the most aggressive I’ve seen until now. My playing style is also aggressive, so I want to be on the attack together with this uniform”. 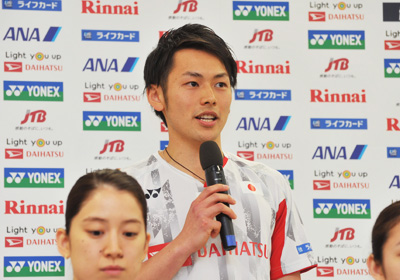 Takeshi KAMURA(Tonami Transportation)
First we have to aim to get into the last 4. Then, if everyone gives their all, I believe this team can win the tournament with this lineup of members. With our team’s strongpoint of low shots, I want to aim for a second tournament victory. As captain, I will do my best to encourage the team with a positive attitude and playing in a way that gives our team momentum. 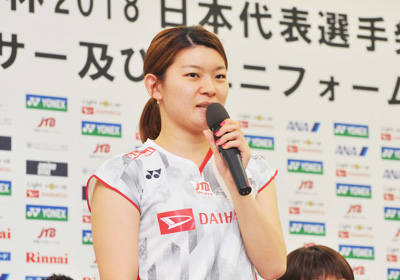 Ayaka TAKAHASHI(Nihon Unisys)
The level of Japan has gone up a lot in the last few years, so I really look forward to fight with this team. This is my 4th appearance at the Uber Cup, so I hope to play in a way that really encourages the players that look up to me. Of course our goal is to win the tournament, but I want to just give our all one match at a time with the rock solid teamwork that the Japanese team is known for. 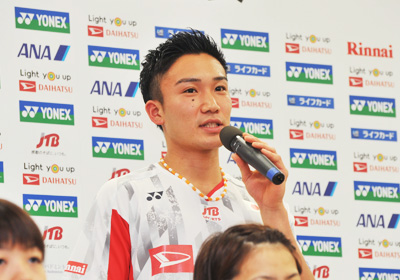 Kento MOMOTA(NTT East)
I have strong feelings about this tournament, because it is the first international tournament which I was a part of a victorious team.
I hope that we can consistently show good quality play in front of all the spectators, then win the tournament on top of that. 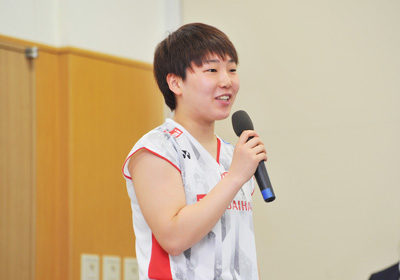 Akane YAMAGUCHI(Saishunkan Co., Ltd.)
I’ll be glad if I can show my enjoyment during the matches, along with my style of play that can often surprise the opposition. I will give my all to contribute to the team, so that we can win the tournament together.