Para-badminton is set to become an official sport at the 2020 Tokyo Olympics, which is now just 2 years away. Following on from last year, the “HULIC・DAIHATSU Japan Para-Badminton International 2018” was held once again in Japan. It is one of the 15 international tournaments officially recognized by the BWF.
The tournament was held over 5 days from September 26 (Wed) to 30 (Sun) at the Machida City General Gymnasium in Machida, Tokyo. A large attendance of over 5,500 people came to see intense matches featuring top para-badminton players from across the globe, including highly ranked Japanese players. 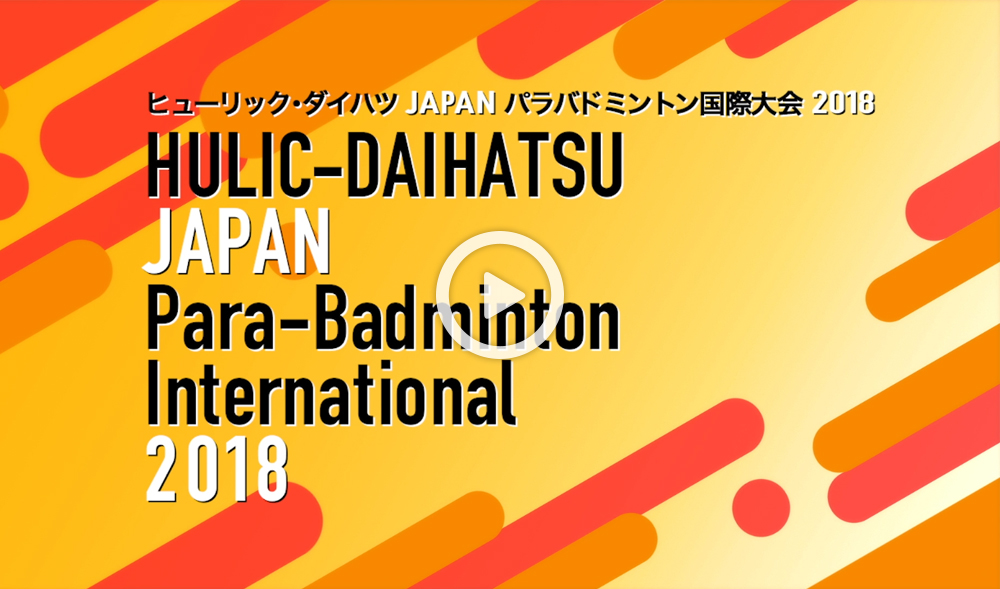 The full version videos of Daihatsu player Ikumi FUKE’s matches is available on the Facebook page of DAIHATSU × Badminton.com. For those who have or have not seen para-badminton before, please take a look!

The para-badminton superpower Japan showed its true strength in Tokyo!

There were 13 Japanese players who managed to reach the final of their categories. Among them, the 8 players of Daisuke FUJIHARA, Taiyo IMAI, Sarina SATOMI, Yuma YAMAZAKI, Ayako SUZUKI, Asami YAMADA, Toshiaki SUENAGA and Akiko SUGINO emerged as the winners. SATOMI, YAMAZAKI and SUZUKI achieved the feat of winning in multiple categories, which impressed the world with the true strength of the Japanese players.

FUJIHARA, who won in the SL3-SL4 Men’s Doubles, paired with Siripong TEAMARROM from Thailand. They played against the German pair of Jan-Niklas POTT and Pascal WOLTER. The match proceeded with the scores of 21-14, 18-21, and 21-10 to last until the final game, but they managed to win thanks to their determined play.

Meanwhile, IMAI, the winner in the SU5 Men’s Singles, defeated Bartlomiej MROZ from Poland in a straight game of 21-14, 21-11. He was not under threat in the match from start to finish, and won this tournament for the first time at the young age of 20.

In the SL3-SU5 Mixed Doubles, the pair of SUENAGA and SUGINO defeated the Thai pair of Siripong TEAMARROM and Chanida SRINAVAKUL in a straight game of 21-15, 21- 18. They won the championship with their flawless combinations.

The SU5 Women’s Singles was the match between Japanese players. The winner SUZUKI displayed her full abilities of the number 1-ranked player in the world, defeating SUGINO in a straight game of 21-15, 21-5.
She also formed a pair with YAMADA in the SL3-SU5 Women’s Doubles, where they played against the pair of Katrin SEIBERT from Germany and Chanida SRINAVAKUL from Thailand. Despite dropping the first game 12-21, they didn’t collapse and ended up winning the remaining games 21-16 and 21-12 to claim her second title at this tournament.

In the WH1 Women’s Singles, SATOMI won against Karin SUTER-ERATH from Switzerland in a straight game. She won the first game comfortably with a score of 21-12, but the second game was a close contest that went to deuce. The tense play continued but in the end she won 25-23.

The highlight of the tournament was YAMAZAKI winning in all the 3 categories she participated in: WH2 Women’s Singles, WH1-2 Women’s Doubles and WH1-2 Mixed Doubles. After winning in the singles as well as the doubles as a pair with SATOMI, she carried her momentum on to the final of the mixed doubles, where she formed a pair with LEE Sam Seop from South Korea. Their opponents were the Japanese pair of Hiroshi MURAKAMI and Rie OGURA. Although they lost the first game 19-21, they won the second and third games 21-14 and 21-15, which clinched her remarkable triumph in the 3 classes.

Interviews with the Winners 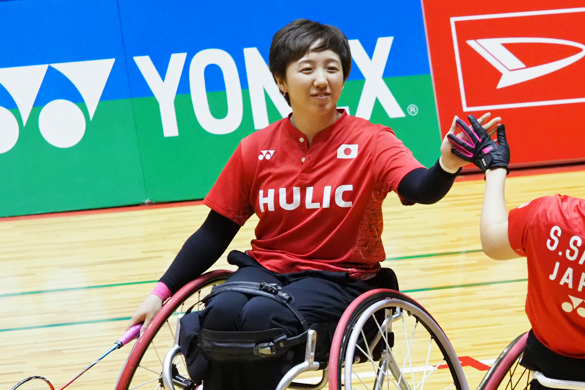 This is the first time that I have won 3 titles at the same tournament. Of course I wanted to win in all the 3 categories that I entered, but up until now I have only managed to win 2 at most, so I am so happy to win 3 this time. I really focused on building up my body this past year, especially my core, so I think this has helped me. For the mixed doubles I teamed up with a South Korean player and we managed to win, even though we could only communicate in very basic language. 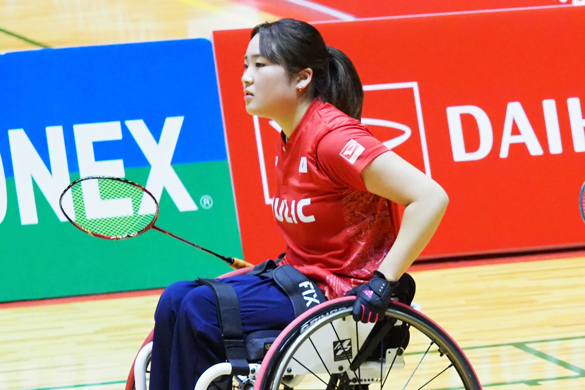 My tension wasn’t released right after the match finished, but I cried tears of joy when I realized I had won. I made many errors so it’s a match I need to learn from, but it was good that I had encouragement thanks to the cheering from the spectators and the voice of my coach, which helped me to play calmly until the end. I also think that strengthening my chair work in training enabled me to win this time. 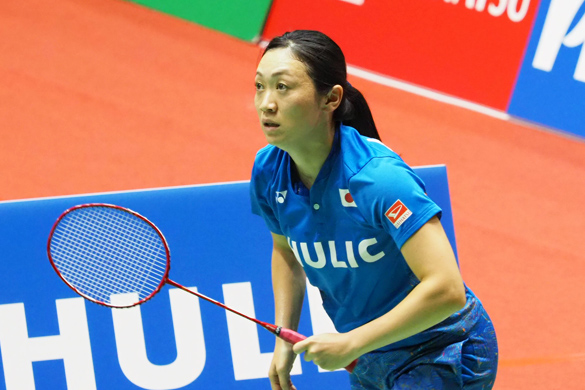 I managed to win 2 titles, in the singles and doubles. I am really happy that I won the singles for the second year in a row. My opponent SUGINO was playing consecutive matches, so she showed sign of weariness in the second game and I could predict the placement of her shots. Our opponent in the doubles was a pair that beated us in the qualifying round, but we managed to strike their weak points that we spotted in that match. It is difficult because singles and doubles require different strategies, but I was able to change my playing strategy to suit each of them. 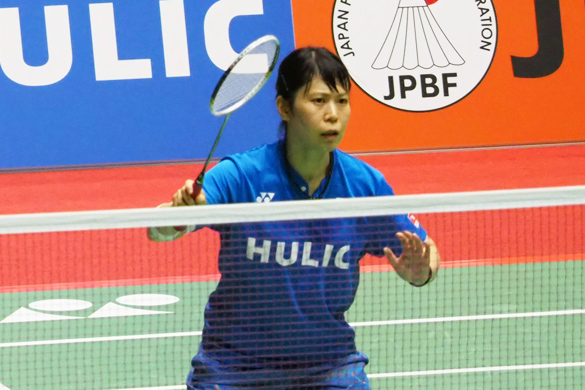 This was the first time I formed a pair with SUZUKI, but she was there to cover for me during the matches so I could concentrate on my capabilities. We lost to the same opponent in the final game of the qualifying round, so I think we won this time because we learned from the previous match and prepared carefully. 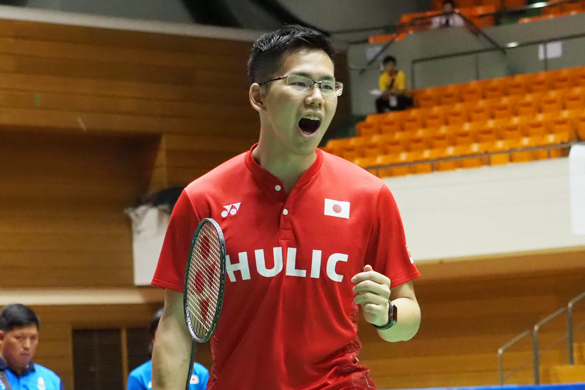 This was the second tournament where I paired with Siripong TEAMARROM from Thailand. We won the last time as well so our combination is still undefeated. I feel so relieved that we were able to win again. It would have been better if we settled the match in the second game, but we got complacent and dropped that game so it went down to the final game. I hope we can learn from this for next time. 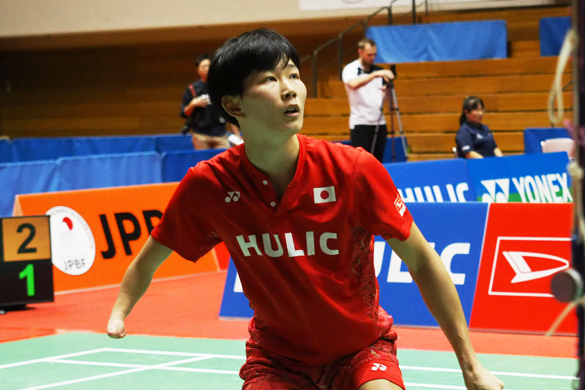 Last year I came in third, so this year I put in an extra effort. I felt I was able to win because I went forward to attack more than usual, so that I was more offensive than my opponents. Because it was held in Japan, I competed with the feeling of wanting to show good matches to all the supporters who came. I could hear the cheering from the crowd really well and I felt encouraged by them even when I felt like I was mentally at breaking point.

I was really helped by SUGINO today. I’m satisfied that I was able to win against the opponents that I had never defeated before. I formed a pair with SUGINO for the first time in 2013, and have always teamed with her since 2016. I hope we can keep going to aim to win the gold medal together at the Tokyo Paralympics in 2020. 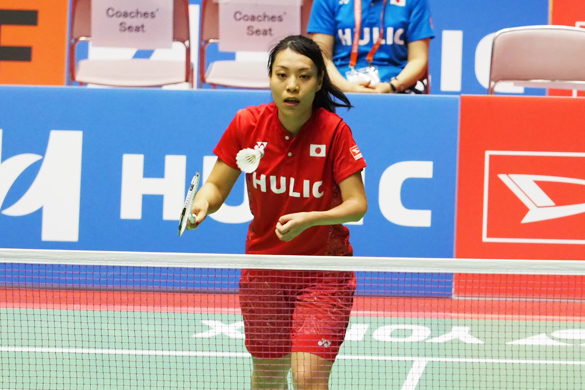 At first I was nervous when I entered the court, but as the match went on I felt I could play more comfortably. I think my movement in the final today was the best among all the tournament. Our strength is that we can create attacking patterns while covering for each other. I am glad that he was able to do that today as well, which led to our victory. 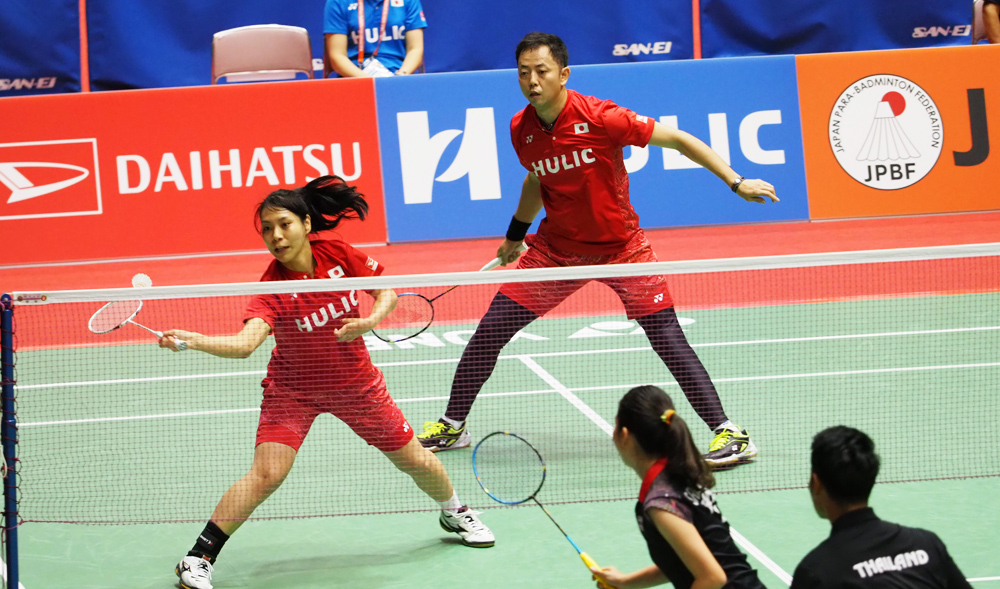 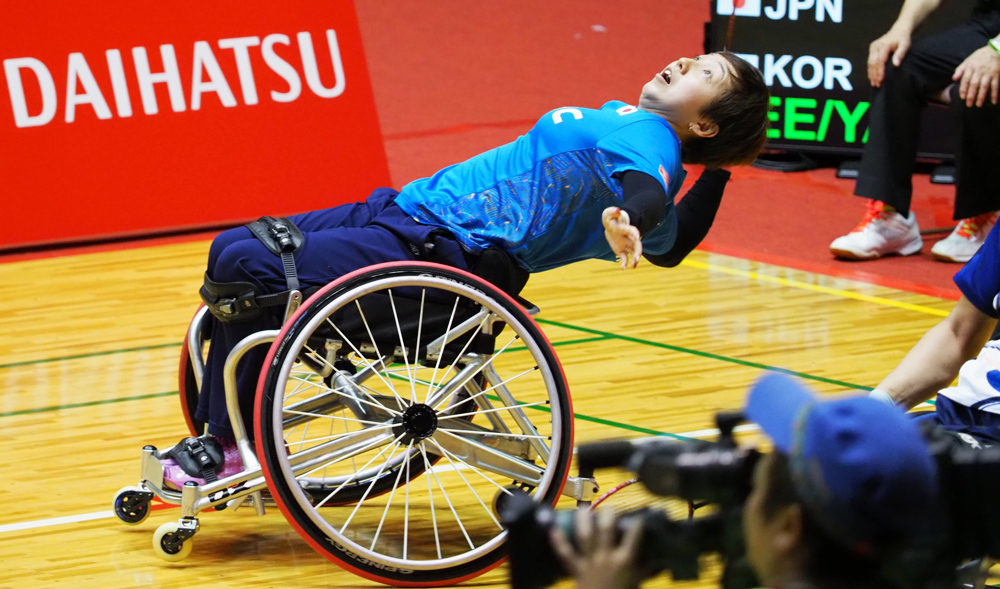 Results of the Finals
Venue Report

Daihatsu is a special sponsor for this tournament, and supported the event by setting up a booth in the lobby of the Machida City General Gymnasium, where they distributed commemorative paper fans and cheering balloons to the fans who came to the venue. Beside the booth there was also Daihatsu’s special vehicle called the Tanto Welcome Seat, which was put on display. People who came to the venue could experience the features of the Flexible Seat as well as the spaciousness of the interior. 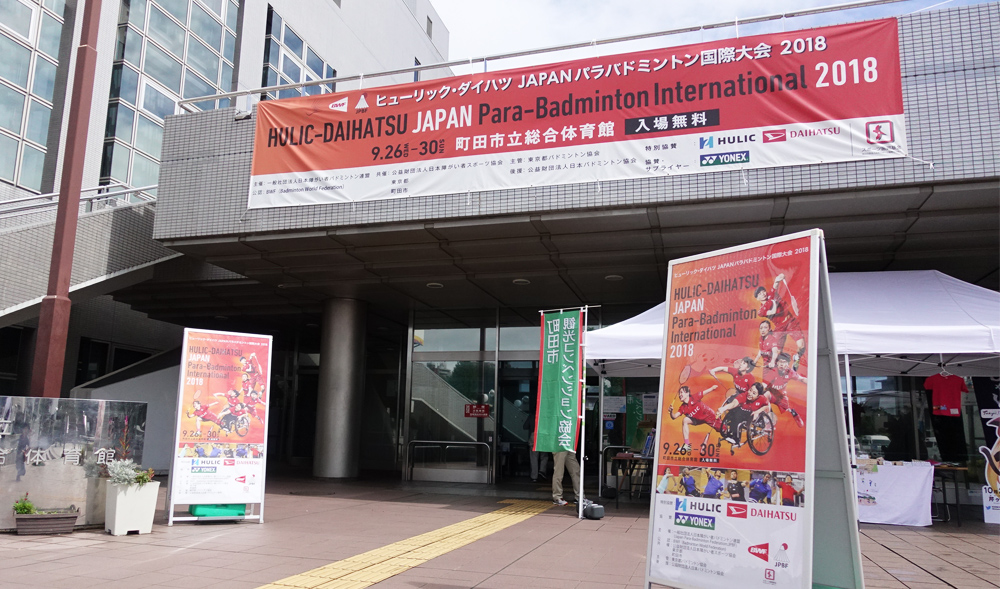 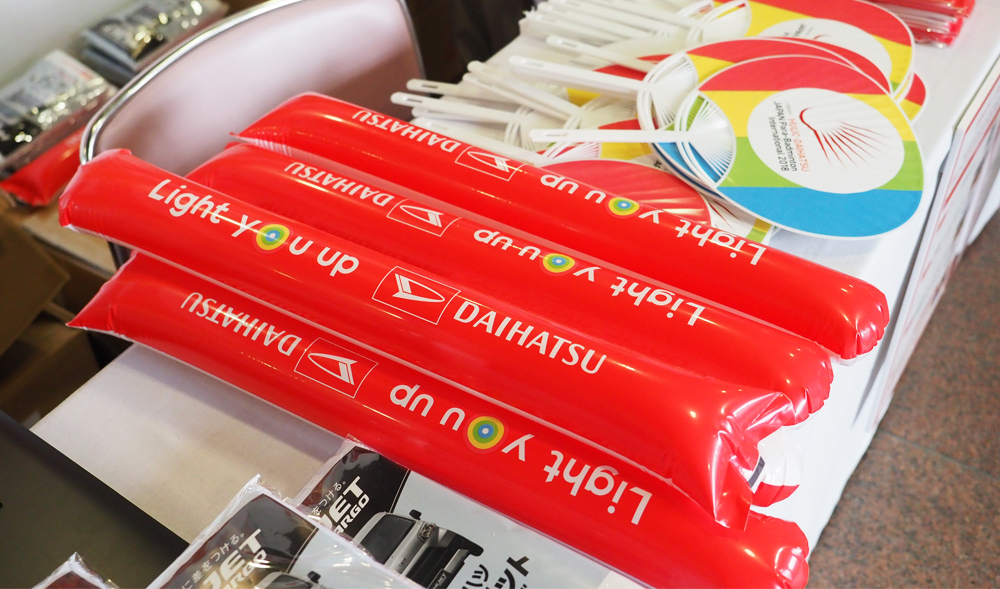